I was drafted on March 20th, 2014, the first wave of mobilisation. I was not personally at the Maidan protests, but I followed the events and understood how it would turn out for me - I knew that I would be drafted because I did my military service in the internal forces and I know how to handle weapons. At the time, conscription was selective. When my friends learned that I was going to be drafted after all, some of them asked me 'Why are you going?

While we were still at the Polovtsi firing range and in Zhytomyr, my guys and I thought we would be sent to the Crimea, but we were still sent to Donbas. We got there at the beginning of April 2014, when there was still not much military action. For me personally, the hostilities began on May 9th at the police department in Mariupol, and then there was Savur-Mohyla.

Fierce fights were taking place there at the time. I got wounded there. We were under mortar fire, Strelkov advanced on us first, we countered the attack with three tanks, it was on July 16th. On the 17th shooting down of a Malaysian Boeing happened close to us, 6 km away from our base, and on the 18th of July we were attacked. Then the ring was locked, and we found ourselves in a large cauldron. The attack was sudden. I remember that the first 3 mines flew past and the fourth one hit me and my friend Ruslan. My legs were broken, Ruslan was dead.

It was only when everything had calmed down that my brothers dragged me out of the trench and took me to the hospital. On the way, I sang the Ukrainian anthem to keep myself awake. Because of the shock of pain, I did not even feel that shrapnel had shattered both my legs and the head, but I sang it. Only in the hospital, when I tried to pronounce my surname but failed, I realized that the situation was more serious than it seemed. I was being evacuated from the area of active shelling for more than 14 hours, I lost a lot of blood and my right leg had to be completely amputated because of dead tissue. The head wound put me into a coma. The doctors at the Mechnykov Regional Clinical Hospital in Dnipro. Then I was transported to the main military clinical hospital of the Ministry of Defence of Ukraine in Kyiv. Everyone said I had no chance of recovery. The local doctors made helpless gestures with their hands, convincing my mother that at best I would be like a vegetable. 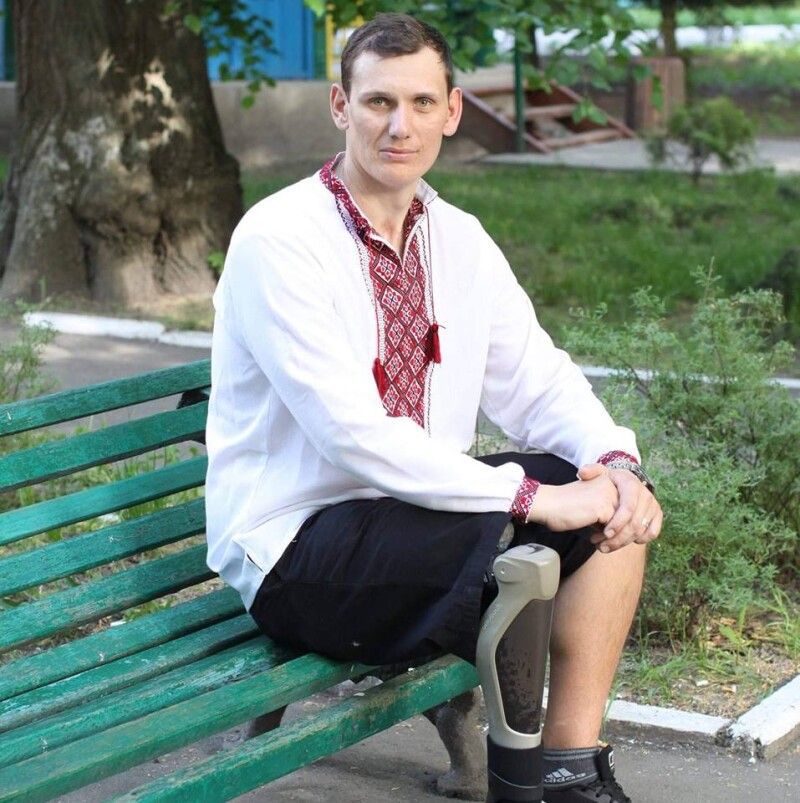 At the beginning of September, I was taken to Koblenz in Germany in a coma state. Owing to the efforts and professionalism of German medicine I quickly got out of the coma, but because of a damaged vessel that pumped excess fluid out of my head and the extra high pressure in the brain I fell back into a state of artificial sleep.

Exactly one year and two months I spent in a foreign country. The German doctors didn't just put me back on my feet, they taught me how to eat, talk, and strive to live again. I had a plate in place of a part of my skull, my left leg had a partially augmented bone, the right side of my face was paralyzed, my eye could not close at all for a long time. In total, I underwent 28 operations. All of this is still affecting me, but now I can walk normally with a prosthetic right leg.

I wouldn't be walking with a prosthesis if it weren't for sport. Three times a week at a gym in Boryspil, I do different types of workouts. One and a half to two hours a day, each time – for a different muscle group. I know that in order to control my prosthesis, my muscles have to be strong, and it is good for my overall health.

Using a prosthesis requires maintenance and replacement of components from time to time. Now I need to replace the liner, without which wearing a prosthesis is impossible.