My military career started with the start of the Russian-Ukrainian war in 2014. I joined the well-known Right Sector Ukrainian volunteer corps, the first assault company.

My friends Davinci, Bugai, Podolian and many other fellows, we were fighting  together until the end of 2015 in the areas of Pisky, Starognativka and Butivka mine. We also carried out missions in the Mariupol direction: Hnutove, Talakivka, Shyrokyne and Berdiansk.

In 2016, I signed a contract and joined the National Guard of Ukraine and was assigned to the Rapid Reaction Brigade. At the time, I was the acting the commander of Special Forces Intelligence of the First Operational Battalion. I was contracted by this unit until 2018.

Then I resigned and immediately joined the Third Special Forces Regiment in Kirovohrad. In September 2018, we arrived on rotation and carried out combat missions in the suburban areas of Donetsk.

One day we were coming in from the Pisky side, when I was wounded. It was a very professionally placed "secret" mine with a tandem charge. My friends rescued me by carrying me one and a half kilometers from the grey zone to "zero". I thank them for helping me, for not abandoning me despite the combat taking place.

I received professional first medical aid and was sent to a hospital in Kharkiv. Then I was transferred to Kyiv. From the capital I was sent to Germany for treatment. Because of the gravity of my injury, most doctors said I didn't have a chance, and those who ventured that I had one, assumed that the chances were negligible. I got a limb amputated and got my first prosthesis fitted in Germany. Then I was sent to the US for further prosthetics.

In short, I spent a year and a half in medical institutions.

In January 2020 I was discharged from hospital and as early as in February 2021 I left with my guys for a rotation and started carrying out combat missions. Certainly, these were not the kind of combat tasks that a healthy man can perform, but slightly different ones. But there was still enough work to be done, such as operational planning, analytics, surveillance of the enemy.

In 2021 my contract ended, I resigned and retired. And in February 2022 I joined the Ukrainian Armed Forces again and went to defend Kyiv region. At first, it was Irpin and Bucha. Then, when the enemy was driven out of the Kyiv region, we moved to Kharkiv. We carried out combat missions: participated in the assault and reconnaissance battles.

At present, I am an active member of the SOF of the Armed Forces of Ukraine. Unfortunately, due to the excessive strain, the prosthetic liner is being worn out quickly, it cracks and goes out of order, and needs to be replaced. 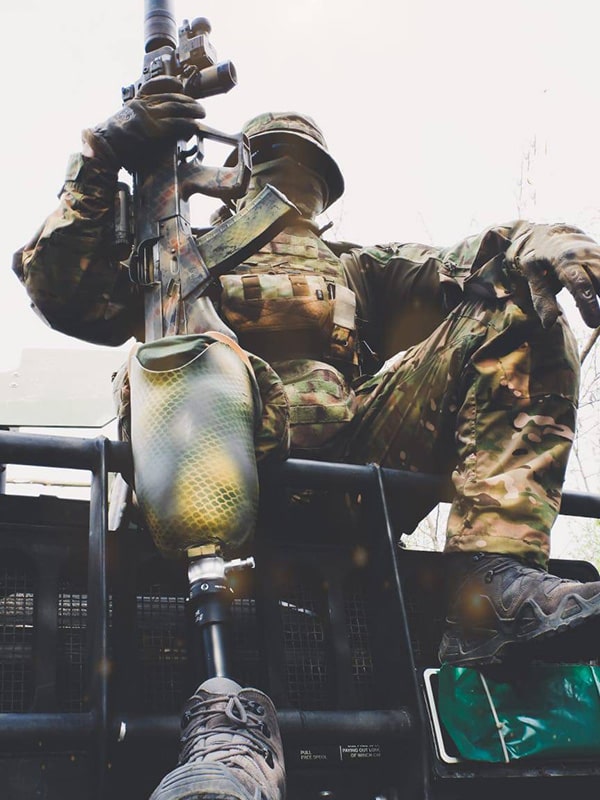